Have you ever wondered how much money you’ve lost around your house? Well it turns out that the first place to starting searching is down the back of your sofa.

Our new study has found that over the course of the year, British households lose a whopping £155 million down the back of the sofa.

We came to this figure after discovering that the average UK household loses £5.77 in loose change down the back of the sofa annually, so across the 27 million homes in the country, this equates to £155,790,000.

Sofa’s aren’t the only place where Brits lose money around their house, with the average household believing that at one time, £5.38 can be found in loose change. This means that there is £145,260,000 lying around UK homes. 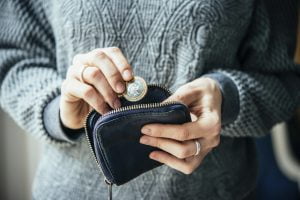 When it comes to being careful with money, Londoners are the most sensible. A fifth of those surveyed from the capital only find 5p on the average search for loose change – compared to the national average of 27p.

In contrast, people from the East Midlands are the least careful when keeping tabs on their money, finding 32p per average search.

Some of the most shocking and horrific things the respondents of our survey found in their sofas included mouldy pizza, used condoms, other people’s underwear and dead mice!

Despite the fact that just under half of the people we surveyed admitted to spending between three and four hours a day lounging on their sofas, shockingly just over a quarter of them tidy behind their couch cushions less than once a month.

One in ten people said that they spend an astonishing 5 to 6 hours a day slumped on the couch, while 5% of Welsh respondents needed seven hours or more to relax on their sofas.

Parents were quick to place blame, with over a quarter (26.8%) of households blaming children for missing items including hairbands, pens and lighters. Despite sofas being the prime location for where Brits lose their things, respondents said that their bedrooms were the second most searched room in the house for missing items.

With Christmas around the corner, and a potential goldmine in loose change lying around your house, it’s the best time to start searching so you can purchase some decent treats for you guests!

What’s the average amount of money found between sofa cushions on each occasion of searching? (in pence)